The annual 5-round Swiss Congress took place in the very spacious, carpeted County Hall in Hertford. Another increase in numbers saw 137 players entering the four tournaments.

“On the heights it is warmer than those in the valley imagine” Nietzsche.

At the top was a very cool Richard Bates 225 on 4.5/5, waltzing off with the top prize of £330 plus the individual SCCU Championship, the Glenroy Cup and a further £100 SCCU award. 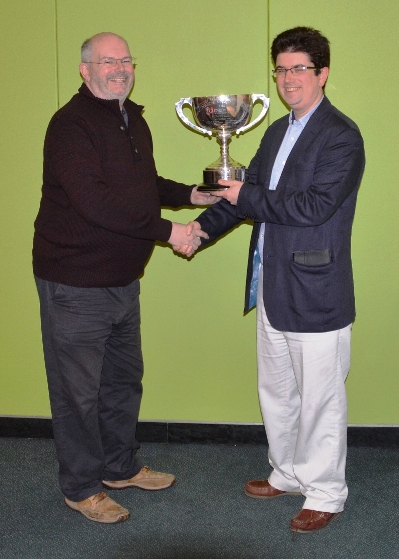 IM Richard Bates (right), winner of the Open and
SCCU Championship, being presented the Glenroy Cup.

Over 110 places below the top was a very hot Martin Clode, grade 97 ECF, who set the Major (under 140 ECF) on fire with 4/4 before Peter Lim managed an extinguisher. Surprisingly, round 4 saw the two bottom seeds, Martin and Ramesh Boury, face each other on board 1, both with a perfect 3/3 !

Martin Clode had started with a juicy game in round one where he exchanged a rook for two bishops. The crunch came with a passed pawn and a discovered check! See diagram. 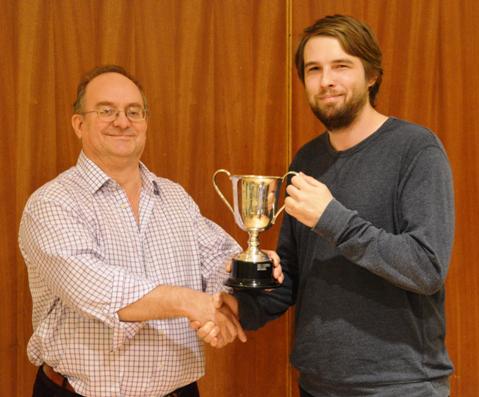 The Major U140, top place was a 6-way tie between Martin Clode, Francois Sweigers, Peter Lim, Rich Wiltshir, Judith Heffer and Oren Levene, 4/5. The U130 grading prize winner was Tom Rixon with 3.5/5 and the U120 best performers were Richard Whitworth, Rammesh Boury, Neal Fisher, and Harunobu Oyama all with 3/5.

The organising team were delighted to spread the prize money around so many participants and increased the funds a little to go a bit further. Total paid out £2300.

The Challengers U170 Tournament brought in 32 contestants, the most in recent years. The familiar name of Finlo Rohrer (winner 2013) took 1st place shared with Norman Hutchinson and Martin Cutmore. The Berry Cup for best Herts performance goes to William Young 152 on 3.5/5 of Bishops Stortford and Manchester University, and he also won the U160 grading prize.

Mark Heffer and Anita Somton shared the U150 prize.

Grades of the Minor players ranged from 24 to 109. For some time Mohammud Jaufarally 100 has been carefully coaching his three daughters in the art of chess tactics and strategy. This year they played the supporting role and he scored 4/5 to share 1st place and win the Lee Johnson Cup for best Herts Minor player. Alan Fraser 107, Paul Buswell 103 and Martyn Maber 103 also won £100 each in the 1st place share out. 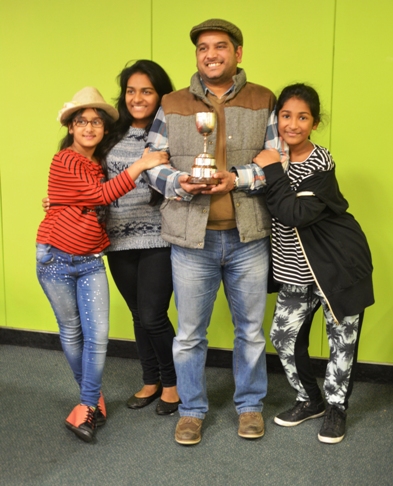 Mohammud Jaufarally, winner of the Lee-Johnson Cup, being congratulated by his daughters

County Hall Hertford continues to be a great location with space aplenty, fresh, good value hot and cold food – with helpful happy staff. We shall endeavour to sort out one or two sticky little problems and see you again next year. 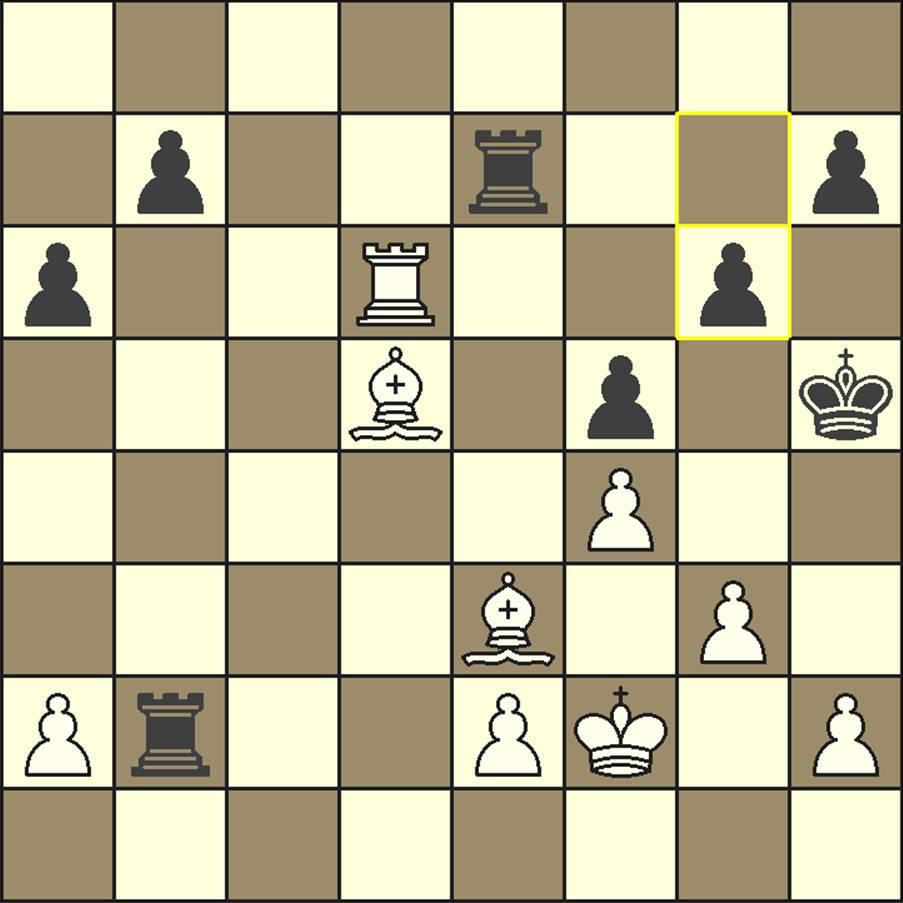